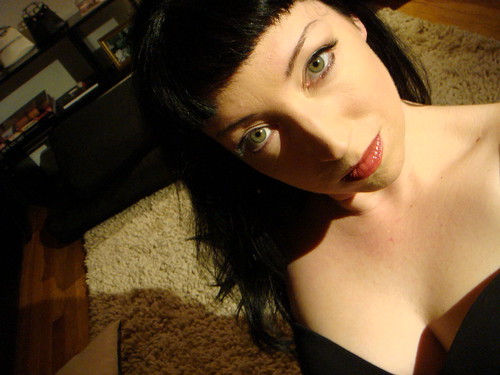 Techyum is the tech, news, and general guilty pleasure distraction of me, Violet Blue — pro blogger, podcaster, vlogger and femmebot at Metblogs SF, Geek Entertainment TV, and Gawker Media’s Fleshbot. I’m the sex columnist for the San Francisco Chronicle, a Forbes Top 25 Web Celebrity, two-time Dorkbot SF presenter, and an eleven year core member of Survival Research Laboratories. I am also the best-selling, award-winning author and editor of almost two dozen books; some translated into four languages. I lecture to cyberlaw classes UC Berkeley and sex crisis counselors at community teaching institutions. My personal podcast is the notorious Open Source Sex, profiled everywhere from Wired and Newsweek (MSNBC) to the Wall Street Journal.
My personal website is Tiny Nibbles (NSFW). My complete personal publicity page is here (rest of site is NSFW).
Read about our newest Techyum contributors Lance Grabmiller and Thomas Roche after the jump.

Thomas S. Roche is not sure how he got into this, but he plans to blame Violet. A widely-published writer and editor of erotica, horror, fantasy, and crime fiction, occasionally all at once, since 2005 Roche has also been the Managing Editor at Eros Zine, where he says deeply insightful things about movies with very strange names. He has been an editor for such places as GettingIt.com, GoodVibes.com and Gothic.net, and has taught sex ed at San Francisco Sex Information for about a decade. He blogs about sex, drugs and cryptozoology at thomasroche.com and issues occasional valentines to the listening public at
thomasroche.libsyn.com.
* * * * * * *

Lance Grabmiller is a lifelong recovering goth, noisemaker, digital dilettante and organizer of events of unusual volume for the San Francisco Electronic Music Festival, various clubs, galleries and alleyways throughout the Bay Area since 2001. He has been languishing in his own label, press and pseudo identity Praemedia since 1994. He is a transplant from the heart of homeland insecurity; an armchair expert in decadent French Literature, classic pornography, anthropology, esoteric music the world over, linguistics, violent philosophies and film. He is a former professional photographer, painter and writer who retired to lurk the nether regions of the web, dabble in sounds he is not qualified to handle and make the occasional foray into amateur video. Programming on old Texas Instruments computers at the age of ten and managing to forget everything he ever learned about computers by the time he left high school, he still harbors fond memories of monochrome screens and the first version of Photoshop.
His general list of musical accomplishments can be perused here, though he’ll most likely change careers before you can read it.
Already taken but available for rent. His Techyum posts are here.