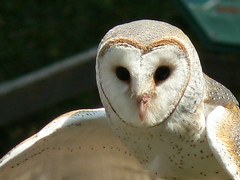 InsideBayArea.com informs me that they’re thinking of using barn owls to fight the rat problem at People’s Park in Berkeley:

In an effort to reduce the number of grayish-brown rats that scamper
around People’s Park in the morning, eating scraps of food and hiding in the agave plants, the People’s Park Community Advisory Board will consider a proposal to install wooden owl boxes in the park to attract predator owls.

Barns owls, which can eat at least a dozen or so rats a night, could
be nontoxic rodent controllers in the 2.8-acre UC Berkeley-owned and-run park off Telegraph Avenue, university officials said.

There is, floating around in the universe, a truly bizarre picture of yours truly holding a barn owl, published in the Sacramento Bee about 1980. As a child I volunteered at the Junior Museum and Science Center, where one of my favorite things to do was to display the raptors to Center visitors and give them a little talk on owl habits. The barn owl, inventively named “Barney,” was my favorite to use because he was friendly for a raptor and relatively placid. He was also of a size that made it reasonably comfortable for someone my size to hold him.

Holding the Great Horned Owl, on the other hand, was at best a grotesque misadventure. I remember one time when I was displaying him he lost interest in sitting on my gloved hand and figured it was an awesome time to take flight. Now that was a party — it was not unlike a lost scene from Harry Potter, I’m telling you.