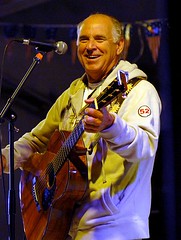 Just in case you were wondering, there is this post from a gentleman named “mind_fucker” over at Fetlife, a fetish-BDSM social networking site:

“Being that there are over a thousand groups on this site, I am just putting it out there that the fans of Jimmy Buffett are some KINKY folks who love to have a good time…If you are a fan, there is a group here called kinky parrotheads, come join us and perhaps we will have a margarita soon…fins up!!!”

I know you are all chomping at the bit to join the group. You will need to join Fetlife first.

You will not see me over there, however; I am not a “parrothead,” even if Mr. Buffett did allegedly take 100 doses of ecstasy to St. Tropez and collaborate on a musical with Herman Wouk that played for six weeks in Miami, called Don’t Stop the Carnival. I’m not making this up. Could I make this up? Granted, if Mr. Buffett did not exist, it would become necessary to invent him… but, thank Providence, he does exist.

I will admit I am tempted to like anyone with a song called Why Don’t We Get Drunk and Screw, but it’s a passing temptation; when I become inebriated enough I do occasionally play and sing Buffett’s Were You Born An Asshole (Or Did You Work At It Your Whole Life). But “Kinky Parrotheads?” My regrets, “mind_fucker.”

Image of Mr. Buffett, public domain from from the US Navy, via Wikipedia.