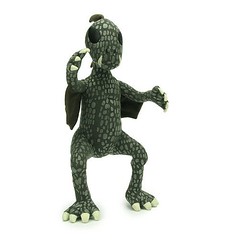 You know, I’m not saying anyone needs to buy me an Easter present — but were you so inclined, you could do far worse than this adorable Chupacabra plush toy from Toy Vault. Complete with bendy limbs! Goats not included, but that’s easy to solve — I’m sure the little guy would like some goat-friends to play with.

In case you haven’t heard, the chupacabra is a sort of doggy creature said to lope around the countryside drinking the blood from livestock — hence the name, which means “goat sucker.” The legends originate from Puerto Rico, but have since spread all through the Spanish-speaking world and to points North; in 2007 in Texas a dead chupacabra was found — it turned out to be a Mexican hairless dog — and in 2008, CNN published video of a chupacabra — maybe — that looks like a dog.

But the persistent mythology of the chupacabra portrays him as this cute little creature — kind of Baby Dracula crossed with the UFO Lizard People. And now you can cuddle them, as can your goats.