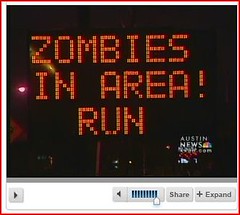 Austin’s KXAN reports that this earlier this week, someone reprogrammed a highway sign to read, instead of “Construction Ahead,” “Zombies in Area! Run” — just in time for the Monday commute.

The station quoted Austin Public Works spokesperson Sara Hartley: “Even though this may seem amusing to a lot of people, this is really serious, and it is a crime…you can be indicted for it, and we want to make sure our traffic on the roadways stays safe.”

I’m with Hartley — if freaks like this start putting out fake zombie messages on the roadways, nobody will take them seriously when the real zombies come. Haven’t they ever heard about the hacker who cried wolf?

Officials said the padlock that secured the construction sign had been cut away, giving the reprogrammers access to the computer inside. The wacky pranksters still had to defeat the device’s password protection.

The article mentions that “speculation among the tech-savvy on the Internet” holds that either Call of Duty 5 (which features “Nazi zombies”) or the upcoming zombie flick Dead Snow inspired the attack. It also mentions that there are helpful sites on teh intrawebs dat will show u how 2 do its.