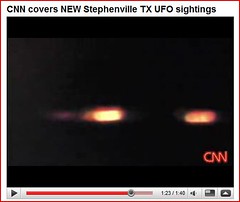 CNN covered a series of UFO sightings in Stephenville, Erath County, Texas. One guy captured video on his mother’s digital camera; the footage has been incorporated into the CNN report and is viewable on YouTube here.

Apparently some F-16s were training in the area, but witnesses who did see the fighter jets saw them after they saw the lights.

I defy you to watch this footage and claim that, since it pretty much looks like some blurry lights in the sky. As far as I can tell, this could be somebody on a hillside waving a flashlight in the general direction of a cameraphone.

Tantalizing proof that the Air Force is chasing UFOs or dude with a 4-cell Maglite? Give me the creepy gnome any day.