x
Image via Telegraph UK.
Chinese company Runto Sanitary Ware probably doesn’t see the same irony in their beautiful fish tank toilets as the typical American child who has held at least one open-casket funeral for their dearly departed Bitsy the goldfish. And the tanks look like they might be the fish equivalent of the Spanish Inquisition, considering not only what the fish will bear witness to, but then the tsunami afterward. But according to Telegraph UK, “The toilet has three separate tanks – one for water flowing in, one for water flowing out, and a third for fish and underwater plants – ensuring that the fish always have enough water to swim in, and are never sucked into the bowl.” Phew! They also state that the LED lights will save on energy, and household water consumption will be minimized.
I’ll admit that I really want one — and they are available for purchase — dig the Mickey Mouse lid and accompanying text, “Tender night light add more love and considerable; Western sentiment and eastern culture mixed reasonable, combine with nobleness and fashion.” But I don’t think I want a fishtank Squat Pan. However, it would be neat to see more things like this in public restrooms: 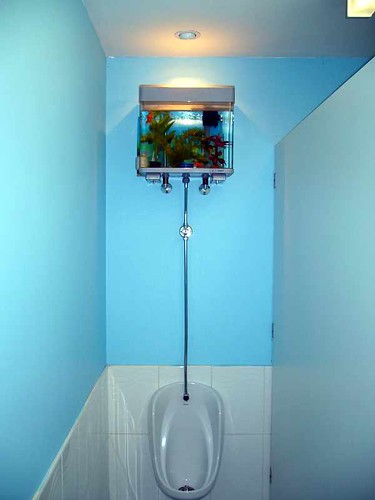