About 7 hours ago the Coast Guard released its video of the US Airways crash, and while it’s about 10 minutes long, it’s well worth watching. In one moment, you can see what looks like a flight attendant slip off the wing of the plane and into the water, quickly noticed by someone nearby who rushes to pull them from the water. The close-ups are really cool. The video is on several news sites which have it proprietarily embedded, but who needs the NYT? Not us. Yes, there was live coverage once the news crews arrived, but seeing the splash is intense. 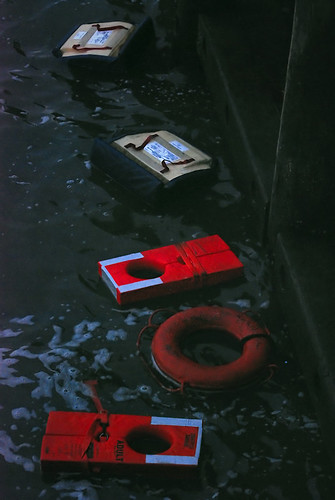 Image of plane seats and life preservers by toolaidback.
There is also a Miracle on the Hudson River pool (full of fantastic photos), which I find unfortunately named. Why? Because I attribute the success of the passengers’ survival to the unbelievable skill and experience of the pilot and crew, not by divine intervention. These people were the best trained, of highest technical skill, and worked all their lives to be able to perform the way they did. They deserve the honor of being heroes for their hard work and bravery, not because divinity intervened. Unless one thinks the geese were also an “act of God”. And that would be weird.