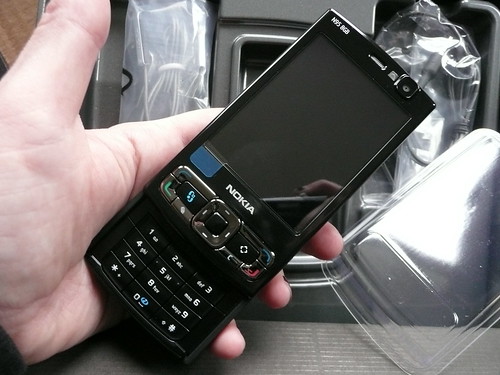 Almost a year ago, Qik made me one of their sponsored livestream videobloggers, but between the phone and working out the bugs, it made live videoblogging from the phone spotty. Now, Qik has tightened up their (free) service and it’s seriously versatile and easy to use — and I got my hands on a brand new Nokia N95-4. It’s a hell of a gadget, and now that it’s out of the box I can’t stop playing with it and it’s never, ever far from reach. And I know I’m not even maximizing it.
I’ll get this out of the way: I have a phone from Helio (an Ocean) and that’s my trusty phone, with a qwerty keyboard and extremely reliable everything; I’ve had 3G for years, my friends. So the N95-4 isn’t quite going to replace my Ocean — but if the Nokia had a qwerty keyboard, it would in about .00006 seconds. On the Nokia I will read your email and enjoy the experience very much. But on the Ocean I’ll respond. Yes, there are other Nokia phones with keyboards: but you say, the E71. Yes, it’s lovely, but it only shoots 15fps video, and that just won’t do.
After charging the N95, the first thing I did was turn off all sounds and get to work. In just a few minutes, I went to “Web”, and downloaded and installed Gmail, Google Maps, and my Qik. I found it unfortunate that the phone’s default search is Yahoo, but without qwerty I won’t *exactly* be blogging from the phone, so I don’t really care. Then I went into the menu>tools>settings>general>personalization>standby mode and changed the “shortcuts” and “active standby apps.” In here, I changed the phone’s desktop icons to Gmail, Google Maps, and other things I’ll want with one click, and I changed the right and left softkey buttons to be Qik and “camera”.
Next, I went into gallery>open online service and it already had Flickr installed; I just entered in my information and activated it. Now when I take a photo (it’s got a 5mp camera, Carl Zeiss lens, with 8G storage and 5M photos size), I click once and it uploads the big, sharp photo to my photo stream — quickly, with the 3G.
So I can press one button from the interface and open the Qik livestreaming app — that’s neat. I’m ready to shoot live video in a few seconds. Qik has integrated with a lot of other online services; when you get a Qik account, you can do what I did and link it to my Twitter, YouTube and 12seconds account (there’s more, but that’s what I’m using right now). So far everything works except the 12seconds integration; when I livestream to Qik, an automatic message (that I customized in my Qik account) is sent to my Twitter stream, and the video is simultaneously uploaded to my seldom used YouTube channel. Here’s a Qik video with the Nokia:

A couple people have raved about the high quality of my phone-to-Qik videos (and they look great; in video ‘settings’ make it high quality and put steady shot ‘on’). But I know that the phone is capable of better video than the 320×240 Qik default, and I really love 12seconds — and the integration not working really isn’t my problem. And I’m impatient.
So I set up the phone’s mailbox, which with Gmail was actually an unbelievably complicated pain in the ass. Fortunately, this is not a road less traveled. Once that was set up, I noticed that when I took a photo or shot a video (not in Qik, just with the phone), when I hit “send” I now had an email option — but no contacts. To keep it simple, I put in two contacts: my Flickr email posting address (find it in your Flickr account), and my 12seconds email posting address (it’s in your 12seconds account). Now when I shoot a high quality video with the Nokia’s nice camera, I can hit “send”, pick Flickr or 12seconds, and it’ll upload my video to either service. Three or four clicks. Here’s a too-dark, dorky test video I shot and sent to Flickr:

So now if someone confiscates my phone for shooting video of say, a BART police shooting, the video will be in so many places already it won’t matter. But mostly, I’m now frighteningly agile with live media and feel like having fun. I also made some physical modifications to the phone: 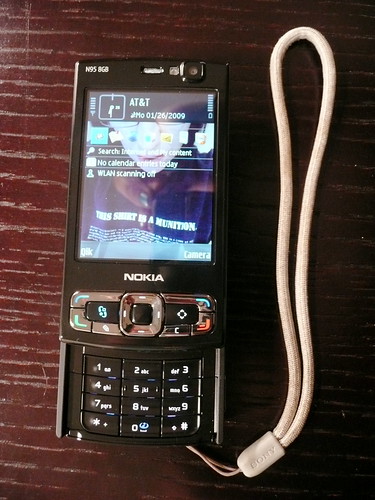 Instead of a kewt fob, I sacrificed my girly style for a practical camera strap. 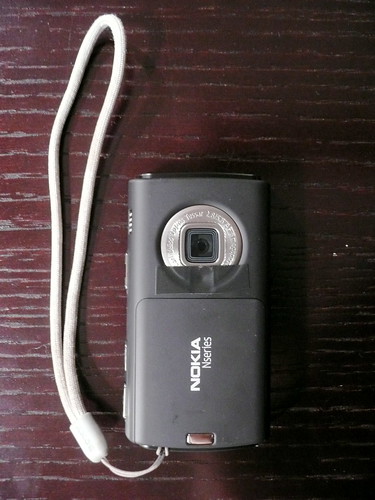 I placed a thin strip over both the red ‘record’ light and the flash. There is unfortunately no way to set the phone’s camera default to “flash off” and I do not shoot with a flash. Plus, the red light is something people find intimidating; if I simply tell people they’re about to be on video, and then say okay, they’re a lot more relaxed than the visible cringe I see when the red light goes on and everyone poses and doesn’t know what to say anymore. Well, anyway, that’s my story and I’m sticking to it. So there.
I love it. I won’t leave the house without it. And like I said, if it had qwerty, I’d use it as a phone. And probably also as a portable computer: add Google Docs and my blog via the web browser, and I’d be invincible.
For those of you with unboxing fetishes, the unboxing photos are after the jump. Here are a couple of photos from the Nokia: 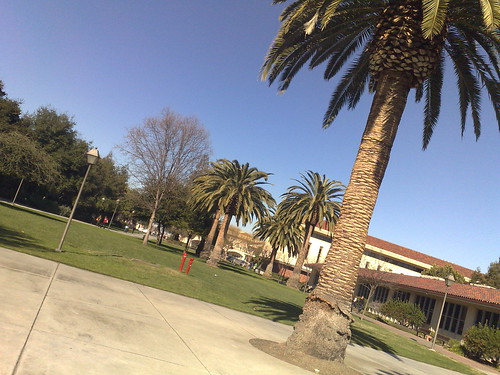 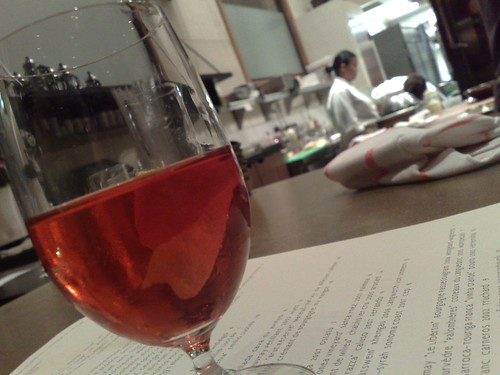 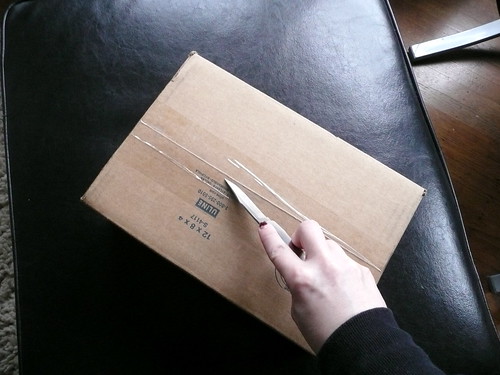 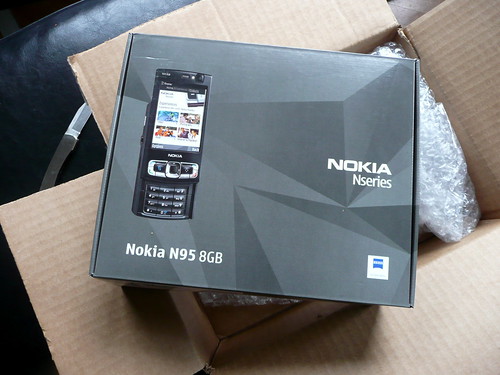 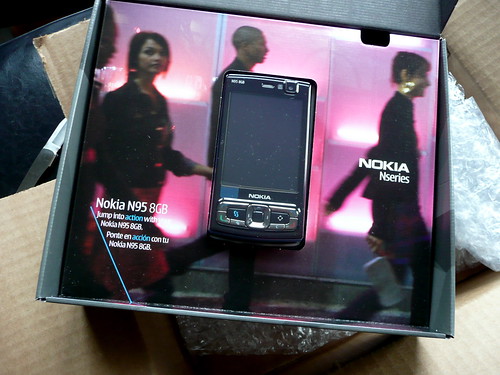 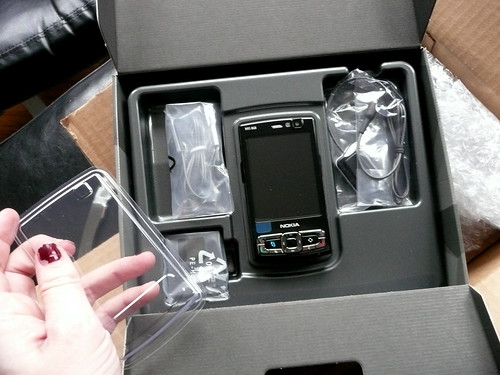 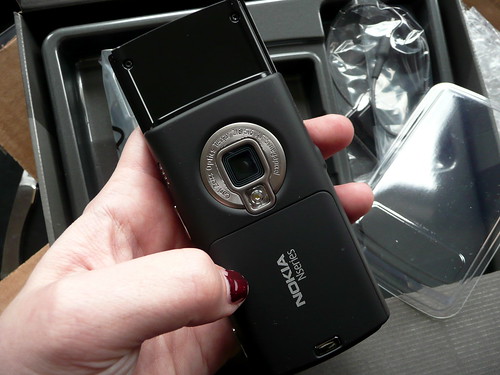 To get more infomation on all the latest Nokia handsets including the Nokia N95, Nokia N8 and Nokia 5330 visit dialaphone.co.uk, Dialaphone is one of the UKs leading phone retailers and is sure to hae the right phone for you