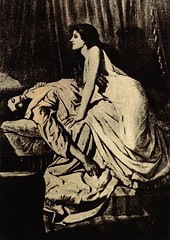 I love this painting ‘The Vampire,’ 1987, by Philip Burne-Jones. It inspired Kipling’s poem, below.

Oh, the years we waste and the tears we waste,
And the work of our head and hand
Belong to the woman who did not know
(And now we know that she never could know)
And did not understand!

Oh, the toil we lost and the spoil we lost
And the excellent things we planned
Belong to the woman who didn’t know why
(And now we know that she never knew why)
And did not understand!

‘And it isn’t the shame and it isn’t the blame
That stings like a white-hot brand–
It’s coming to know that she never knew why
(Seeing, at last, she could never know why)
And never could understand!’

The woman in the painting is thought to be based on the stage actress Mrs. Patrick Campbell, with whom Philip was romantically linked.

On the death of his father in 1898, Burne-Jones acceded to the baronetcy that had been bestowed on his father — who reportedly only accepted the honor because Philip was into the idea of inheriting the title.

I nabbed the image from Wikipedia, and the text of the poem from Vamp Girl, since it doesn’t appear to be on Project Gutenberg.