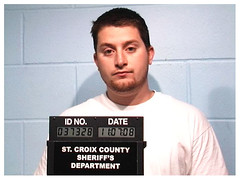 Am I a bad, bad man for laughing at the story of Kyle Drinkwine at The Smoking Gun? Don’t answer that. Just sing along.

“Meet Kyle Drinkwine. The Wisconsin man, 24, allegedly became so incensed by a lackluster karaoke performance of a heavy metal song that he assaulted the singer and a second man, police charge. According to a River Falls Police Department report, Drinkwine throttled singer James Mischler, 28, and his friend Cyrus Kozub, 29, “over one’s ability to sing karaoke.” Though cops did not specify which song set Drinkwine off last week, Kozub told TSG that Mischler was performing “Holy Diver,” the title cut on Dio’s 1983 debut album (the band is fronted by Ronnie James Dio, the former Black Sabbath lead singer). [In a subsequent interview, Mischler told TSG that when Drinkwine and some cronies started heckling him, he responded with a putdown about the “big gaudy crucifix” worn by Drinkwine. “I told him he should find a better vending machine for his jewelry,” Mischler recalled, adding that the comment angered the heckler, who himself had earlier performed an Eminem song.”