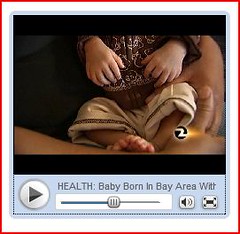 There’s been a rare case in Daly City, just south of San Francisco, of a human baby, Kamani Hubbard, born with 12 perfect, functioning fingers and 12 toes. This image is a screencap from the video on Oakland’s KTVU.

Though Polydactyly, as it’s called, is not that rare, it is very rare for a baby to be born with fully functional extra fingers. Usually, the extra digits are in some way nonfunctional; some may have bone tissue without joints, or be otherwise problematic for the hand’s owner.

The trait of Polydactyly tends to be more common in those of African origin than those of European origin and more common in boys than in girls. It runs in families, and the baby’s father, Kris Hubbard, had “nubs” of extra fingers removed as a child. according to the KTVU-2 story, Kamani will not be altered, and the six-pound boy’s extra digits are unlikely to cause any problem whatsoever.

If you want to get your serious nerd on, eMedicine has an overview of polydactyly with a link to a fascinating 1994 study that compared data on human polydactyl births in Jefferson County, Alabama and Uppsala, Sweden.

Famous human polydactyls include blues guitarist Hound Dog Taylor, who had a sixth finger on each hand but amputated one of them with a razor blade while drunk. I was first exposed to the fascinating story of Taylor in Living Blues magazine back in the 1980s; he used the one on his left hand to great advantage when playing guitar. He also had an improbably large thumb with which he could make barre chords. Non-guitarists, that’s when you hold down all six strings of a guitar with your finger, something almost nobody can do with their thumb (but it is occasionally seen by those with more typically sized thumbs).

Incidentally, the trait is fairly common in certain breeds of cats. Such cats are sometimes called “mitten cats.” According to Wikipedia, Ernest Hemingway was given a 6-toed cat by a ship captain — presumably they mean a 24-toed cat, six toes on each paw, not one-and-a-half. After his death his home in Key West was made into a museum and home for the cats; about half of the polydactyl feline’s descendents now living in the home are polydactyls.

I had the occasion to live with a very affectionate polydactyl cat in the early 1990s. He had 7 toes on each front paw and six on the back. Let me tell you, you’ve never known love until you’ve had biscuits made on you by a 26-toed cat.

Congratulations to the Hubbards for their little bundle of joy, and to Kamani Hubbard for being one of a rare group. Perhaps by the time you get to your teen years, Kamani, maybe science can address the problem of how you’ll flip people off.