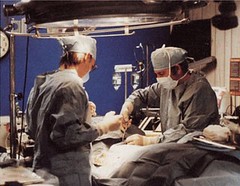 Upon his death 41 years ago today, on January 12, 1967, Dr. James Bedford became the first human to be cryonically preserved. He died of natural causes, and his body was frozen under a grant from the Life Extension Society. The three scientists who froze him included Robert Nelson, president of the Cryonics Society of California, who wrote a book about it: We Froze the First Man. Bedford was placed under the care of the Alcor Life Extension Foundation, from whom this photo comes, in 1991. Alcor actually seems to favor just freezing the heads in big silver things that look sort of like souped-up Fleshlights. The Bigfoot Dewar is designed to hold four whole-body patients and six “neuropatients” — heads, son. They mean heads.

In unrelated incidents, Alcor suffered accusations by a former Chief Operating Officer who said they’d mishandled the head of baseball star Ted Williams, drilling holes in it and accidentally cracking it. They had already been accused, in 1994, of murdering a patient with barbiturates before removing her head, and of hastening the 1992 death of a terminally ill patient, but no charges were ever filed in either case.

According to Wikipedia, the cryonics community celebrates the day of James Bedford’s preservation as “Bedford Day.”

Photo: Alcor Life Extension Foundation, by way of Wikipedia, from which all this info is condensed.