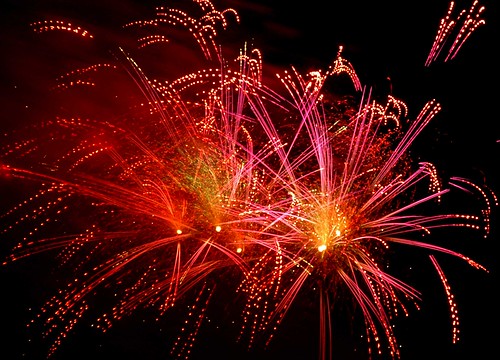 Miss the 4th, or want an explosive reason to visit Japan on the last saturday of July? I was reading The Economist’s Flowers in the sky, where they rave about the firework and gunpowder prowess of the Japanese. In the piece, they allude to (but I had to Google to find) the Sumidagawa Fireworks Festival held in Asakusa. And, I found lots of lovely images of hanabi taikai on Flickr (like Yamate‘s, above). Snip:

“REMEMBER, remember the fifth of November—gunpowder, treason, and plot.” No disrespect for America’s foremost celebration, but Britain’s Guy Fawkes Day leaves Independence Day in the gloom.
The trouble with the holiday on July 4th is that it comes barely a fortnight after the summer solstice. That means, for the majority of Americans, by the time it’s dark enough to watch the celebration’s crowning glory of fireworks, most young children (and lots of exhausted parents) have nodded off. By contrast, November 5th falls mid-way between the autumn equinox and the winter solstice. Firework displays throughout the British Isles start not long after children get out of school and go on late into the evening.
The Japanese have solved the summer fireworks problem by turning it into an art form for adults. The country’s spectacular hanabi taikai (flower-fire festivals) take place from the end of the rainy season (usually in mid-July) onwards, when it’s swelteringly hot and sticky. This is weather for lounging late into the night out of doors, while washing down delicacies with cold beer. Perhaps because they are mainly for adult appreciation, firework displays in Japan have evolved technically over the generations into far more complex aesthetic endeavours than their counterparts elsewhere.

Uncategorized
One comment on “Flowers In The Sky: Sumidagawa Fireworks Festival”