Sen-Constable Steve Warr said, “It’s illegal to tamper with the machines and we will not tolerate that behavior,” arguing that the prank promoted a negative road safety message. 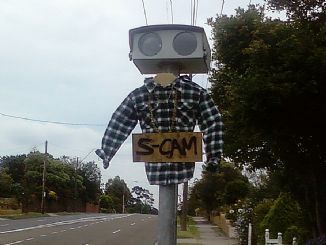 An earlier story in the Leader described the shameless propaganda acts of the anonymous artist, who seemed to be taunting the police. He “vowed to strike again;” he said he “[denied] what he was doing was vandalism because he claimed it was not causing any damage,” and “[saying] his aim was to make people laugh and the cameras were a valid target because they were a ‘revenue raising scam’.” He even went so far as to set up a Facebook Page.

The guy’s clearly getting ready to release his own Little Red Book; the Leader quotes him as issuing the following revolutionary statements:

“The cameras look like robotic heads with two eyes and I thought it would be funny to put a little body underneath, like Wall-E,” he said.

He followed up last week by adding a flannel shirt and gold chains to a camera on the corner of Doncaster and Greythorn roads, North Balwyn.

The cameras were stripped soon after by the authorities.

“I’m already planning the next one, maybe at a bigger intersection,” the man said.

Unfortunately, the press keeps calling it the S-Cam prank, which makes it hard to figure out that he’s talking about a “scam.” As in rip-off. But whatever.